An intentional company begins with the highest standards.

Designing some of the most unique Interiors and Tiny Homes in the industry requires the highest quality people in the industry. We’re on the hunt for talent. If your heart speeds up a beat or two for our values, take a look below for opportunities to join a team of capable professionals dedicated to each others’ success. 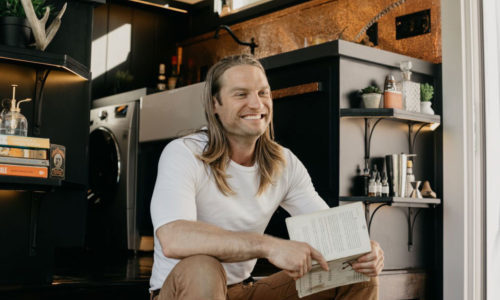 ▶ Play
Everything at New Frontier begins and ends with David. From the Vision, to the Brand, to Architectural Design, Interior Design, Decoration/Staging, and the execution of it all in the Build, it all starts in his head and doesn’t come to life without him driving it every step of the way. Design is his first love, and he is completely self taught. He is deeply passionate about all the different components of New Frontier and is obsessive perfectionist who never compromises the quality or beauty of any project.

Born and raised in Nashville, TN, David has always been fascinated by the form and function of structures, good design, and intentional living. Working construction during summers in high school, he gained the fundamental knowledge of what has become a lifelong passion for building, carpentry, the art and science of designing and crafting a home, and the Do-It-Yourself ethos. He studied Literature and Philosophy at Furman University and paid for his education with an athletic scholarship.  Seeking experience over any single career path, David backpacked on a shoestring budget through Europe for 8 months after graduating university.

Next he moved to New York City where his passion for design began to materialize in the strange world of fashion. He worked for Ralph Lauren (RRL), starting out in retail and then moving into visual merchandising, window displays, etc. He then moved on to concept design for Earnest Sewn.  After 3 years, he was burnt out on the city life and the fashion industry and wanted a completely different experience. An opportunity to help build and expand an orphanage in the village of Mutungu, Uganda became his next mission.  After almost a year in Africa, he moved to Chicago where he got into the hospitality business, opening and operating restaurants.

While in Chicago, he began to formalize his experience designing spaces. First taught himself how to design and build furniture. This eventually led him to join a a small design/build company, where his love for interior design became a job, a regular daily practice, designing and building some of the trendiest restaurants, bars, and nightclubs in the city.  After 6 years in Chicago, family and an opportunity to open a new restaurant/bar in Nashville brought him back south. This situation quickly turned into a huge disappointment, which became a blessing, leading to a year of serious introspection.

David began re-evaluating his life, re-establishing his values and cataloguing the disparity between his intentions and actions. The principles of Mindfulness, self-reliance, self-awareness, debt-free living, sustainability, community, and intentional living became the driver of behavior. He began to cultivate his life so that the most important components were brought to the forefront of daily living instead of being relegated to free time. He knew it was time to dive head first into becoming a full time desinger. And during this time he discovered the relatively nascent tiny home movement.

The philosophy behind the tiny house movement (desperately needed Affordable Housing, making great quality design and craftsmanship attainable to many people, intentional living, community, etc.) drew him in and inspired him to devote his working hours to furthering its cause. David has chosen to translate that philosophy and his own into New Frontier. And as the company evolved, he knew he wanted to get back into Interior Design for homes of all sizes and various businesses. In 2018, he began to seek out and take on traditional Interior Design projects. Now, the very successful tiny home arm of the business is on auto-pilot, and he has shifted more of his focus and time to Interior Design. 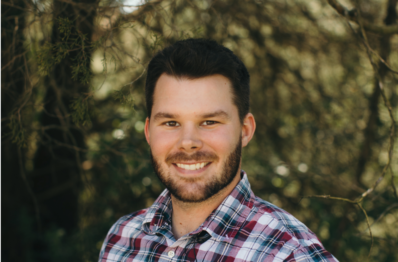 Taylor attended The University of Kansas where he graduated with his Masters of Architecture. Taylor practiced architecture for three years prior to moving to Nashville to explore a career in construction management. Taylor’s works with David to design our homes.

Originally a father-son project, Eddie Latimer and our Founder, David Latimer built two tiny homes on speculation that they could learn about the market, and hopefully turn a profit in the meantime. David Later met Zac Thomas, who would later invest and bring production building expertise to bare. Soon thereafter, New Frontier was born. Inside of a year, it would have the Alpha, its first fully custom product featured on an episode of HGTV. During this time, David worked at the Entrepreneur Center in Nashville and fortuitously bumped into a to-be mentor, Stryker Warren, a guiding light to the company’s formation and early growth.

Interest built over the next two years. More press opportunities. More HGTV. This time featuring the Escher, our second model. We collaborated with Disney to build a new family home for victims of the California wild fires. We presented it to them live on Good Morning America

We released two models this year; the Cornelia and the Orchid. We launched the Home that runs on Dunkin’ with Smuckers and Dunkin at Home brands, and presented it live in Central Park, NYC alongside Olivia Wilde.

With some wind in our sails, we looked to build our operations and sales teams to keep up with demand from all angles; retail customers, consumers, developers, and Airbnb entrepreneurs. We’re anticipating a very warm reception for our new 24′, $75,000 model, the Luna. Additionally, we partnered with Paragon Builders here in Nashville, TN and have broken ground on Nashville’s first tiny home hotel, Stay | New Frontier.

© 2019 Nugg Club
Alpha
Cornelia
Escher
Orchid
Design
Media
About
Contact
Subscribe to our mailing list to receive the latest and greatest insider info.
Thank you! Your submission has been received!
Oops! Something went wrong while submitting the form.

The Alpha Tiny Home. Our original, innovative, versatile model that proves a tiny home doesn't mean compromising the amenities and functionalities of a full size home.  Its multi-functional furniture, clever storage, and utilization of natural light combine with a rustic, industrial, chic aesthetic to create a home unlike any other.

A tiny home for the whole family. With a spacious interior, king bed room suite for privacy,  and a second loft for the kids, your family can live in harmony. A luxury bathroom, walk-in closet, and an office/hallway make this tiny home a perfect solution for the modern, adventurous family.

A writer's cabin to court your muse. When best selling author Cornelia Funke needed a cozy retreat to write her next novel amidst nature, she worked with New Frontier to create this peaceful palace. Find your artistic streak in the model named for its co-creator.

Like its floral namesake, this home reveals a subtle luxurious strength. Whether your journey is inspired by respite or adventure, end your day in the comfort of fine furnishing fit for the most discerning design pallet.

Inquire about the Enterprise Design and Homes